I grew up on a small family farm in the middle of a desert where seeing my father growing crops in tough environmental conditions developed my love for the plants. I completed my undergrad and masters in Plant Breeding and Genetics at University of Agriculture Faisalabad, Pakistan. I came to the WSU in Fall, 2016 for my Ph.D. where I aim to use CRISPR-Cas9 and other molecular techniques in Neff’s lab to modify and study genes for their role in seed and seedling traits in Arabidopsis and Canola. I aim to learn more about crop improvement techniques to develop varieties with increased seed and seedling vigor. 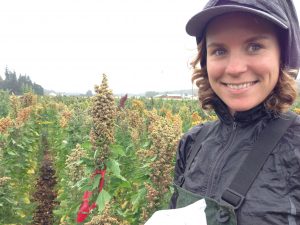 Julianne grew up in central Massachusetts surrounded by small-scale apple and pear producers. Julianne received her B.S. in Environmental science from Colorado College, leading her to study agroecosystems in India and Thailand. Her first undertaking of interdisciplinary research was with an Indian organic tea cooperative that resulted in her undergraduate thesis, A Political Ecology of Tea in Darjeeling, India. Julianne’s global agricultural career has placed her in New Zealand, Australia, and the US working with biodynamic orchardists, regenerative ranchers, and organic farmers. In 2017, Julianne earned her M.S. in Crop Science at WSU with research topics including evolutionary participatory quinoa breeding and soil microbiology. After her M.S, she continued working with WSU at the Puyallup Research and Extension Center and subsequently, the Washington State Department of Agriculture. In 2019, Julianne rejoined the Sustainable Seed Systems lab to pursue an interdisciplinary PhD in Crop Science and Human Health and Nutrition. Her research efforts are focused on evolutionary participatory crop breeding, breeding crops for enhanced nutrition and low input agroecosystems, and determining human health responses to new crop cultivars. 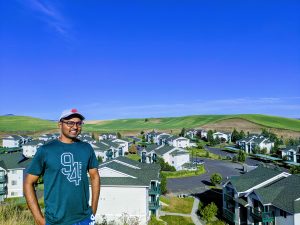 I grew up on the foot of Himalayas in Nepal where I earned my B.S. and M.S. in Plant Breeding from Agriculture and Forestry University. I joined WSU in the spring of 2019, to pursue my Ph.D. under the supervision of Dr. Zhiwu Zhang in Crop Science. My research focuses on removing inbreeding depression, a barrier to hybrid production, in alfalfa for quality and quantity of production. I am interested in incorporating modern molecular techniques in classical plant breeding through integration of bioinformatic tools, advanced statistical methods and genetics to amplify crop improvement program for sustainability of production. I hope to learn skills and gain experience that would shape my career as a better plant breeder in the future. 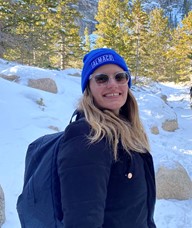 I am a graduate student coming from Serbia, Eastern European country. Since I was young, I was always curious about biology and living organisms around me which eventually led to Agriculture school. I graduated 2019 at Faculty of Agriculture in Belgrade, Serbia. During bachelor’s I learned a lot about plant physiology, anatomy, biology and pathology, and how to prevent and manage different pests and diseases in crops. After BS, I was an intern for a year at the University of Nebraska, Lincoln in Pesticide Application Technology laboratory where I learned more about agricultural practices in corn and soybean in Eastern Nebraska. Now, I am Dr. Lyon’s graduate student at Department of Crop and Soil sciences. I am working on problematic weed species in eastern Washington-Equisetum laevigatum or smooth scouring rush.

I completed my B.S. in Agriculture with hons. in plant breeding and genetics from Punjab Agricultural University, Ludhiana, India. I joined WSU in summer of 2016 as a Ph.D. student in Dr. Kulvinder Gill’s lab. My research focus is Improving thermal tolerance of Wheat Rubisco activase gene (TaRCA) via molecular characterization and genetic engineering. 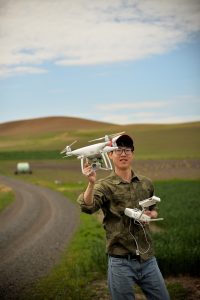 After finishing my B.S. in Animal Science, I started my M.S. Degree in Animal Genetics and Breeding at Huazhong Agriculture University in Sep. 2013. After graduation, I worked as bioinformatics engineer and big data engineer in China for 2 years. My research interests now include applying deep learning and machine learning to agriculture. My main research focus is to accelerate the crop breeding by using remote sensing and drone sensing. During free time, I’m very into soccer and basketball with friends.