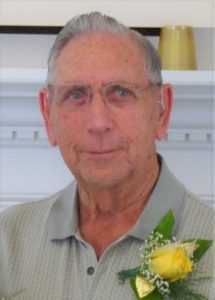 Clarence was born August 23, 1928, in Park City, Utah, to Clarence and Jane Peterson.  He grew up on the family farm in Nampa, Idaho, where he was active in the 4H and FFA and graduated from Nampa High School in 1947.  After a year of college at the University of Idaho, he joined the US Army in 1950 and was stationed in Germany.  Upon return in 1952, Clarence enrolled back at the University and worked with Idaho Crop Improvement Association.  He received his B.S. in Crop Science and an M.S. in Plant Pathology in 1956.

Clarence began his career with the USDA-ARS in Pullman, Washington, in 1959 as a technician for renown wheat breeder Dr. Orville Vogel.  He was with Dr. Vogel during the development and release of the first semidwarf wheat varieties, Gaines and Nugaines, which transformed wheat production in the Pacific Northwest.  With Dr. Vogel’s encouragement, he took a leave of absence from the USDA and completed his PhD in 1970 at Oregon State University under the direction of Dr. Warren Kronstad.  He returned to Pullman and assumed Dr. Vogel’s breeding program upon his retirement, working in close collaboration with geneticist Dr. Bob Allan.  His breeding position and program transitioned to Washington State University in 1988.  Clarence retired in 1994.

Dr. Peterson had a major impact on the Pacific Northwest wheat industry through release and wide-scale adoption of his winter wheat varieties, including Daws, Dusty, Hiller, Kmor, Lewjain, Luke, and Rod. His variety Eltan was the #1 variety in Washington state from 2001 to 2010 and has been grown on over 8.5 million acres.  It was in commercial production for 28 years, from 1993 through 2020. From 1997 to 2006, approximately 1 of every 3 winter wheat acres in the state were in his varieties – mostly Eltan, Rod, or Lewjain.  Clarence’s legacy and impact on northwest agriculture continues as evidenced in the pedigrees of many modern wheat varieties.

Clarence married Patricia Ann Cossairt on September 2, 1956, in Moscow, Idaho.  Together they raised three children in Pullman and enjoyed many weekends with the family boating on Lake Coeur d’Alene.  Upon retirement, they moved to a home on the lake and then, in 2002, to Meridian, ID, to be closer to his brothers and sisters.  They enjoyed travels, cruises and spent their winters in Yuma, AZ.  Along the way, he became a ‘fair’, although often frustrated, golfer and spent many days on golf courses with family and friends.  They returned to Pullman in 2021.

A graveside service will be held at 11:00 on Wednesday, July 27, at the Moscow Cemetery.  This will be followed by a celebration of life with a reception and lunch for family and friends at the Best Western University Inn – Moscow. The family has asked that, in lieu of flowers, please direct donations or memorials to the Clarence and Jane Peterson Scholarship Endowment, established at the University of Idaho Foundation, 875 Perimeter Drive MS 3143, Moscow, Idaho, 83844-3143.  Please indicate donations are in honor of Dr. Clarence Peterson.

Andris (Andy) Kleinhofs was born December 25, 1937 in Dobele, a village in the small country of Latvia. His wife, Jolanta, who he would later meet as an adult in the United States, coincidentally was born in the same village four years after him.

As children, they separately traveled similar refugee paths during the World War II and grew up in Displaced Person camps in Europe before emigrating to the US with their families. Andy’s family settled in Clearwater, OK, and after earning his Bachelor of Science at the University of Nebraska, he entered the U.S. Army where he served four years until September 1962, rising to the rank of Captain.

Andy went on to obtain his PhD, also from the University of Nebraska, and it is there he met his wife at a youth swimming party.  Andy said they were “destined for each other”. They fell in love and were married June 4, 1965, and had two daughters, Laura, and Anita.

After Andy obtained his PhD, the family arrived in Pullman in 1967, where he began his 43-year career at Washington State University (WSU) teaching and conducting research in basic plant science and molecular genetics of barley. During his time there he published more than 200 peer-reviewed articles in prestigious journals and was widely recognized as an international leader in plant science and molecular genetics. He spent time in research labs during sabbaticals in Mol, Belgium; Canberra, Australia; Cambridge, England; and As, Norway. His love of travel and passion for finding the best fishing took him to many additional countries including Japan, Jordan, China, New Zealand, and many countries in Europe.

Andy was a generous and supportive father and husband, who also enjoyed camping and mushrooming in the northwest region, as well as many trips to Hawaii with the family.

Andy was diagnosed with cancer in November of 2020 and his last months were spent with visits from former colleagues, students, friends, and family. He was fortunate enough to celebrate his 84th birthday last Christmas, and died peacefully at his home on May 9th, surrounded by his children and after a phone call with his older sister, Parsla Pruitt. He is survived by his daughters Laura Kleinhofs (with husband Andrew Mattice) and Anita Neill, and grandchildren Aija and Andrei Mattice.

Andy was preceded in death by his wife, Jolanta, his parents, a brother John Kleinhofs and a son-in-law Mark Neill.  Andy will be laid to rest at the Pullman Cemetery Saturday May 28th at 10:30 am and those who would like to attend virtually may do so by livestream at the following link, https://www.hdezwebcast.com/show/andy-kleinhofs   Corbeill (formerly Kimball) Funeral Home of Pullman, WA has been entrusted with arrangements.  Memorial donations are suggested to the World Wildlife Foundation or to the CAHNRS department of WSU.